The WarpScript Execution Engine is the part of the Warp 10 Platform which runs the WarpScript code, simply submit code via a HTTP request, the engine will execute it close to where the data reside and will return the result as a JSON object which can be integrated into an application.

The WarpScript language is also integrated in many existing data processing languages and environments such as R, Python, Zeppelin, Jupyter, Spark, Pig, Storm or NiFi, with the ability to use the same WarpScript code across all those environments. This greatly increases efficiency.

Lastly, by providing off the shelf support for time series data, WarpScript enables a greater focus on business use cases by waving the need to build or adapt low level libraries.

In WarpScript, as in all concatenative programming languages, every expression is a function and juxtaposition of expressions denotes function composition, in the spirit of how Unix pipelines work.

WarpScript manages a data pipeline with which all functions interact, getting their arguments by emptying the pipeline, and filling it with their results. The data pipeline is passed from function to function during the execution of WarpScript code.

The Warp 10 Analytics Engine, the WarpScript Execution Engine of Warp 10 accessed via the /api/v0/exec endpoint, returns a JSON list which contains the elements of the data pipeline after the code execution. The first element of this list contains the most recent element of the pipeline.

Here is a full example of a fictional function FUNC which is applied to two arguments 42 (a number) and 'foo' (a character string) and produces a single result which is the string representation of its arguments separated by a comma.

The execution starts with an empty data pipeline, here the pipeline is represented with 5 empty slots, in gray.

Therefore changes the data pipeline into:

Next the FUNC function is called:

it will consume its two arguments from the data pipeline, will concatenate their string representations and will add the result to the pipeline. The yellow pipeline slots are the arguments which will be consumed by FUNC:

The final state of the pipeline is therefore:

If executing this code via the Warp 10 Analytics Engine, the resulting JSON would be:

as the data pipeline contains a single element at the end of the execution. If the call to FUNC was omitted, the result would be:

reflecting the two elements present in the data pipeline at the end of the execution.

This is really all there is to understand about the way WarpScript is executed. The rest of this article will walk you through some of the language constructs so you can easily understand the various examples present in the function documentation pages.

WarpScript code can contain comments with the following syntax:

WarpScript has support for basic and composite types.

There is also a null type which is produced by the NULL function.

Those types follow their commonly observed syntax. STRING values are percent encoded and enclosed in single or double quotes.

Composite types can be nested, for example you can nest lists to simply represent matrices.

You already know that WarpScript considers Geo time Series as first class citizens, this is reflected in the very existence of the GTS type.

A GTS should be seen as a container to which data points can be added. The Warp 10 Storage Engine, Warp 10's own enhanced TSDB, manages persistent Geo Time Series, and WarpScript can create GTS either by retrieving data from a storage engine, or programmatically via the NEWGTS function.

Geo Time Series have a set of metadata attached to them, a class name which describes what kind of values are stored in the GTS, a temperature for example. They also have a set of key/values calles labels which are used to add context to a Geo Time Series, for example by recording a serial number of a device or the IP address of a server being monitored. Jointly the class and labels form the id of the Geo Time Series as managed by the Warp 10 Storage Engine. Geo Time Series' metadata can also contain another set of key/value pairs called attributes. Contrary to labels, attributes are not part of the GTS id and can be modified during its lifetime.

A Geo Time Series in WarpScript needs to have values all of the same type with supported types of LONG, DOUBLE, BOOLEAN and STRING. A hybrid type BINARY can also be stored in a GTS, a byte array encoded using ISO-8859-1 and stored in a character string.

It is also possible to store multivariate values as the value of a data point in a GTS. This type of value is really an inner Geo Time Series which is encoded and stored as BINARY. Since it is a GTS of its own, it can have multivariate value too, don't you love nesting?

Each value can have a latitude and longitude and/or elevation attached to it.

Geo Time Series is a very important data type in WarpScript, as you progress you will become more and more comfortable with it.

When pushing data to Geo Time Series managed by the Warp 10 Storage Engine, the syntax called the GTS input format should be used.

To learn more, a tutorial describes operations on GTS.

You will learn more as you go deeper into WarpScript.

Technically you could work directly with the data pipeline, but it is often more convenient to use variables, i.e. addressing values by a named symbol.

Storing a value in a variable is done using the STORE function which consumes both the name of the variable to create and the value to store into it from the data pipeline.

Variables are global, in order to limit the scope of a variable you can save the current context which has all the variable definitions using the SAVE function, modify or create variables and later restore the saved context using RESTORE, the variables will return to their initial state.

Frameworks are the companion functions to the Geo Time Series data structure. They provide common ways to interact with GTS instances. WarpScript has 6 frameworks.

Macros allow for code factorization, they are code fragments which can be invoked from WarpScript code.

They can be deployed:

The syntax for invoking a macro is @name/of/macro.

Some WarpScript functions accept macros as arguments, the syntax for creating a macro in WarpScript is:

If a variable macro contains a macro as value, it can be invoked using @macro.

As a Turing Complete language, WarpScript has some constructs for doing flow control.

Most of the functions related to flow control have macro arguments.

We have covered the basic concepts of the WarpScript language. As you will discover in the various documentation pages, WarpScript has many more aspects which would have turned this introduction into a monument if they were all mentioned. For example WarpScript includes a large subset of the Processing drawing library which means you can create and manipulate images right from within WarpScript.

For now we encourage you to experiment with WarpScript, either in the documentation pages for the various functions, or via WarpStudio or the Warp 10 Sandbox. 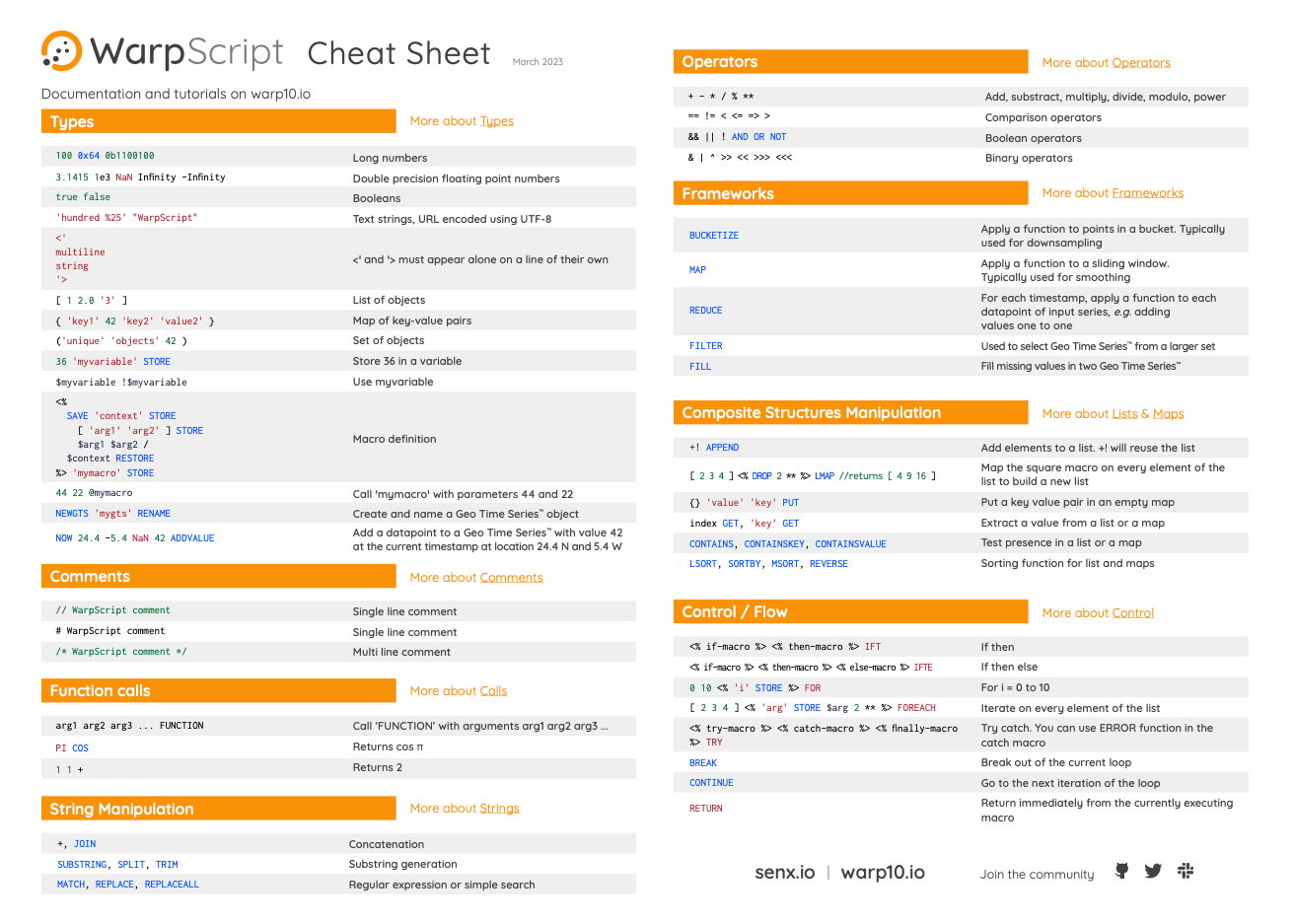